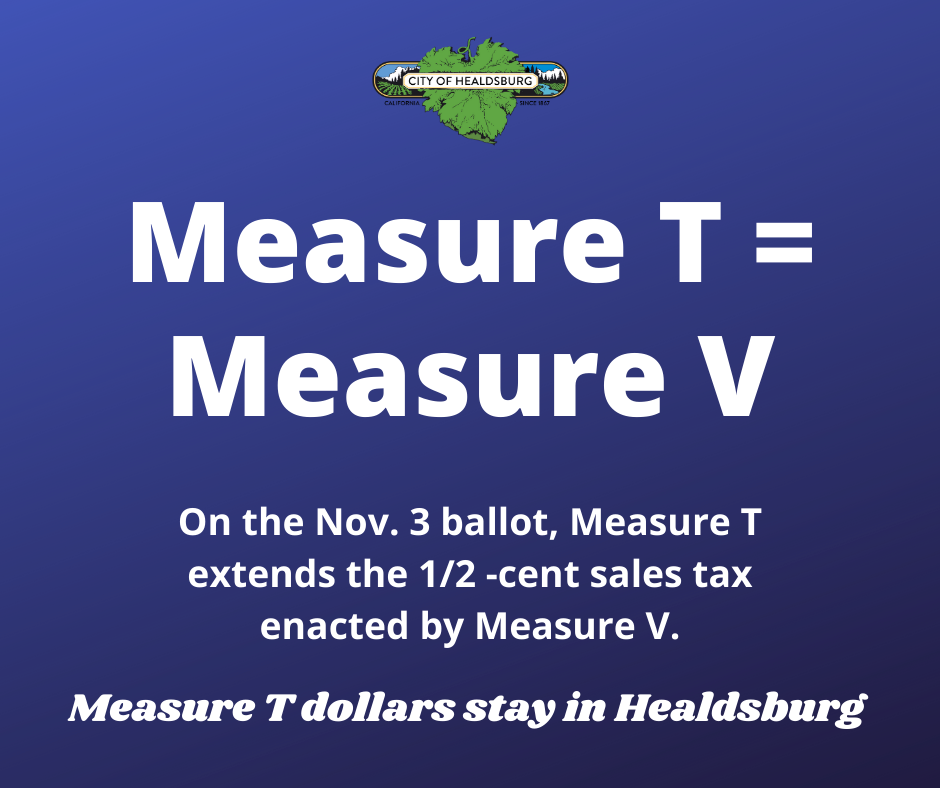 Measure V, a half-cent sales tax that was approved by voters in 2012, expires on March 31, 2023. This tax is paid by visitors and community members and generates about $2.1 million each year for vital City services and programs including public safety, City infrastructure (e.g. street maintenance) and facilities, and economic development.

The full text of the Measure T ballot measure can be found on the Sonoma County Registrar of Voters Office website.

The City Council of the City of Healdsburg (“City”) has placed Measure T on the ballot. If approved, Measure T would repeal and replace the existing transactions and use tax within the City. The existing transactions and use tax, of one-half of one percent (0.5%) of the gross receipts of a retailer from the sale of all tangible personal property sold in the City, expires March 31, 2023.

If Measure T passes, it would repeal the existing transactions and use tax and replace it with a tax, also of one-half of one percent (0.5%), that will be in place until and unless ended by the voters. The only change would be to the duration of the tax; the rate and nature of the tax would not change. The current transactions and use tax of 0.5% generates approximately $2.1 million annually. The City Council and staff estimate similar revenues in coming years.

The total sales tax rate within the City is 8.75% of the purchase price of retail goods sold within the City. Retailers collect the tax at the time of sale and remit the funds to the California Department of Tax and Fee Administration, which administers the tax. Of that amount, the City receives 1.5%, the County of Sonoma 1.25% and the remaining 6.0% goes to the State. The City deposits the portion it receives into its general fund. The revenues are available to support the full range of municipal services.

Because Measure T does not legally restrict the use of tax revenues to any specific purpose, it is classified as a “general tax,” not a “special tax.” The tax proceeds may be used for any valid municipal government purpose, including but not limited to public safety, street maintenance and repair, economic development, and maintenance of city facilities.

A “Yes” vote is a vote in favor of the tax. A “No” vote is a vote against the tax. Measure T will be approved if it receives a simple majority of “Yes” votes. If Measure T is approved, the total transactions and use tax of one-half of one percent (0.5%) will remain in effect unless and until it is ended by the voters.

If Measure T is not approved, the current transactions and use tax of one-half of one percent (0.5%) will remain in effect until it expires on March 31, 2023.

What is Measure V?

Measure V is a half-cent sales tax that helps fund vital city services and programs. All 100 percent of the revenue is spent locally to benefit Healdsburg residents.

Voters approved the measure in 2012 to stabilize City finances, offset the loss of redevelopment funding, and protect essential City services. In April 2013, Healdsburg began receiving sales tax revenues from Measure V. Revenues generated by Measure V are estimated to be between $1.8 million to $2.1 million annually for the last four years.

How should the City apportion Measure V funding according to the City Council's priorities? Let us know: The one-page English- and Spanish-language survey has been mailed to all community members.

The deadline to submit your completed survey is Feb. 6, 2020. Please mail it via the envelope provided or drop it off at Healdsburg City Hall, 401 Grove Street. If you'd prefer taking an online version of the survey, go here:


The City Council developed a funding-priorities plan to illustrate needs and demonstrate its intentions to the voters. Here are some examples of how the funding has been spent.

Develop a facility plan to provide for the maintenance and repair of city facilities such as: